W. G. Cannon Paint Company was founded by William Garland Cannon in 1942 in Lenoir, NC. In the beginning, the company only operated as a paint contract business. The company rented a building on College Avenue that it used for office space and storage. During the first year, W. G. Cannon secured contracts to paint both Caldwell County and the City of Lenoir's schools. So, his first summer was spent overseeing about 25 young boys as they painted the schools. 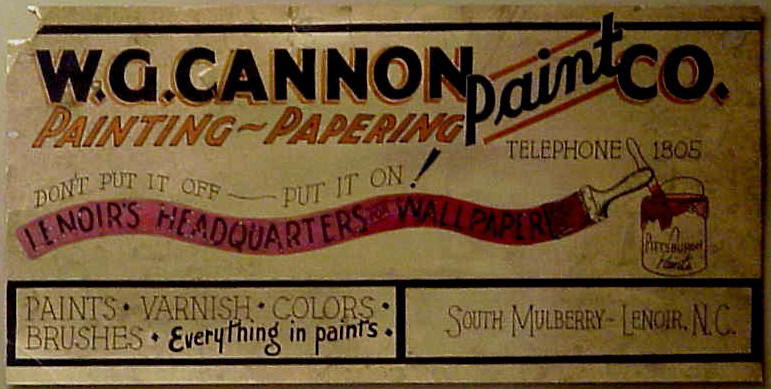 Then in 1948, the company moved to Mulberry Street when it purchased a retail paint store. This allowed the company to increase its focus to retail sales of paint and also wallcoverings, along with the contracting business. Its first advertising sign (pictured) still hangs in the company's office.

The company's next move occurred in 1972 because of the need for more room. On Harper Avenue, W. G. Cannon Paint started carrying carpets, blinds, crafts, and other home items. In 1977, a fire destroyed all but the front room of the company's building. The fire, however, did not stop W. G. Cannon Paint from opening everyday. The staff served customers from the front room while a new store was built directly beside the one that burned.

In 1989, the company moved again, this time to its current location on Zacks Fork Road. This was not only a location move, but also another change in direction for the company. It quit carrying wallcoverings, blinds, crafts, and carpets, and expanded into the abrasives market.

At the current location, the company no longer employs any painters, but sells products to many independent paint contractors. The focus has also shifted more to abrasives, which make up 70% of total sales. The name also changed to W. G. Cannon Paint & Abrasives. The company has expanded its current operation to three buildings consisting of over 20,000 square feet for distribution and manufacturing. Even though our focus is no longer on retail sales, individuals still purchase paint for projects at their homes.